"There's a slim chance we make it outta here with our skins."
―Jock[src]

CC-1428, nicknamed "Jock", was a skilled clone commander in the Grand Army of the Republic who served in the Galaxy Wars. He led Flash Squad, a subunit of the 332nd Legion. He and his men fought in several battles.

CC-1428 was first commisioned for battle during the First Battle of Geonosis when he and the rest of Flash Squad were tasked with capturing the Glantorin Spire from the Confederacy of Independent Systems. The troops infiltrated it through various air ducts. With the utilization of probe droids, they were able to capture it without any loss of life. Once they completed their capture of the spire, reinforcements were called in to keep it under Republic control. Flash Squad was then ordered to enter the rest of the battle. There, CC-1428 was injured severly by a battle droid by a shot to his chest. The commander did not have any medical attention until the fight had ended. However, he did manage to protect himself with his hand blaster. Squad medic CC-0888 helped save CC-1428's life by patching up the shot wound and moving him to a more secure location. After the battle fully came to a close, a medical drop ship collected him and many other injured troopers, taking them to a medical station. Despite having such a bad wound, medics described him as having the strongest will to live of all the injured clones. He was declared fit for combat after three days of heavy care. Within a few days after being released, he received the nickname "Jock" for being skillful with a blaster, being considered a "rocket jockey".

"Find out where the control room is and cancel all reinforcements. If we manage to thwart their operations, we win."
―Jock

The Second Battle of Geonosis involved the Flash Squad returning capture a Separatist base. After clearing it of Geonosians, the squad infiltrated the control room, and realized that the whole station had surveillance. Upon noticing it, they were sidestepped with destroying the surveillance room so they could be incognito. Basher took it into his own hands to do so, being as aggressive as he was. Once they reached the room, they were suprised by the sight of Delta Squad.

CC-1428, like all clone troopers, contained a strict loyalty to the Galactic Republic. A clone commander, he did have some independence and individuality. He was the leader of Flash Squad, which was part of the reason they were so successful together. Though a very loyal clone, Jock was known to be flexible when it came to some of the rules. He was notorious to neglect things, such as standard regulations, a clean shave, and remembering to follow direct orders. He was known amongst his squad for his drinking and gambling during leave.

During the Second Battle of Geonosis, he expressed his "task-master" mentallity when he took control of his men. He and his troops were tasked with destroying a Separatist base, and they came across the members of Delta Squad, who were also sent on the mission, but by Jedi Master Alla D'Isani. Jock, during the hacking of the Separatist computers, expressed the feelings of irony when he noticed that clones think differently when they are all the same person. During the mission, Snips expressed that Jock needed to shave his stubbled face. The men eventually finished installing the virus, and returned to the Republic station. Snips challenged Jock to a game of Saabac, and wagered that if he won, Jock would shave, and if Jock won, Snips would paint 'Jock Rules' all over his helmet. Snips eventually won, and Jock was forced to shave his face. The clone also told him to shave his hair into a military crew cut, which got the commander angry. His goatee was also shaved.

Jock often used the phrase "what the snip", which was created among the Flash Squad. He wore his naturally black hair in a buzz cut, and had a medium goatee on his chin.

Jock always carries his DC-17 hand blasters in his holsters, and he draws them when it's time for action. He sometimes uses larger weapons, but not very often. On occasion, he uses Z-6 rotary cannons, one of his favorites of the "big boys".

Commander Jock with his twin pistols

Jock shows off his pistols 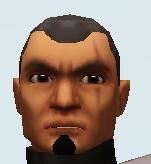 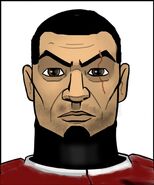 Retrieved from "https://animationcity.fandom.com/wiki/CC-1428?oldid=12243"
Community content is available under CC-BY-SA unless otherwise noted.